Beyond the Blade - Episode 1

Video Thursday 24th June 2021
Honda Racing UK is pleased to present its brand-new feature series for the 2021 season - Beyond the Blade, with Episode 1 available now on YouTube and Facebook.

Following on from the popular previous features 'BSB Diaries' and 'Building the Blade', Beyond the Blade has a different look and feel for this year's British Superbike season with motorcycle journalist John Hogan presenting each episode, bringing you even more behind the scenes action, as Honda Racing UK challenge both the Bennetts British Superbike Championship with Glenn Irwin, Ryo Mizuno and Takumi Takahashi, as well as Tom Neave in the Pirelli National Superstock Championship.

Episode 1 follows Honda Racing UK during the official BSB testing programme ahead of the start of the season this weekend (25-27 June) at Oulton Park. For Glenn and Tom, testing was about getting back up to speed with the Fireblade SP, a machine they both experienced success aboard last season winning races. But for new recruits Ryo and Takumi they face a different challenge, learning the British circuits and racing without traction control and rider aids.

Check out Beyond the Blade - Episode 1 on YouTube and Facebook, and see how Honda Racing UK got on during pre-season testing.
Search 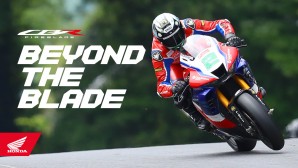