Beyond the Blade - Episode 4

Video Thursday, 2nd September 2021
Beyond the Blade is back for Episode 4, where motorcycle journalist John Hogan takes you behind the scenes with the Honda Racing UK team during the 2021 Bennetts British Superbike Championship season.

In this episode, join Honda Racing UK as they head to two of the most popular rounds on the calendar Donington Park and Cadwell Park. Watch as the team returned to their winning ways at Donington's National Circuit with Glenn Irwin claiming two second place finishes and Tom Neave back on the top of the box in the final Superstock race of the weekend, having finished second after a controversial result in Race 1.

The team then headed home in what was back to back race weekends, as the British series returned to Cadwell Park in Lincolnshire. Topping the sheets across all practice sessions, Tom placed his Superstock CBR1000RR-R Fireblade SP on pole position and was once again victorious at both his and the teams' home round.

Also in this episode John finds out the hard way how the team train in the gym with a 5am wake up call, we hear from Honda's Head of Motorcycles in the UK Neil Fletcher about the operational side of running a race team and what being a team at Cadwell Park means logistically. 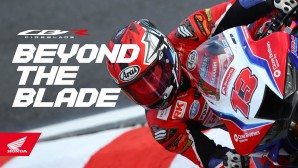