Beyond the Blade - Episode 5

Video Thursday, 23rd September 2021
Honda Racing UK is pleased to present Episode 5 of Beyond the Blade, giving exclusive behind the scenes access to the Honda team in the 2021 Bennetts British Superbike Championship. In the fifth instalment of this exciting series, the team heads to rounds seven and eight of the championship, to take on Snetterton 300 and Silverstone's National Circuit for the all-important Championship Showdown, Showdown.

Heading back to Snetterton in Norfolk, the team were confident for a strong weekend after the results in 2020 and it was Tom Neave in the Pirelli National Superstock Championship who came away celebrating aboard the Honda CBR1000RR-R Fireblade SP, after a Pole Position in Qualifying and a dominating race victory, where he smashed the lap record not once, but twice during the race.

All eyes were on Glenn Irwin at the eighth round of the series, where Silverstone was the backdrop for the all-important Showdown decider, where the top-eight in the overall BSB standings after Sunday's Race 3, would become the 2021 Superbike Showdown 'Title Fighters'. Taking his first race win in 2021 during a dramatic opening race, Glenn followed up with two solid point-scoring races to secure his place as the seventh 'Title Fighter'.

Tom also had a strong weekend after finishing fifth and second, which keeps his championship hopes alive and now leads the series by 22 points. Silverstone was another new race circuit for the teams' Japanese duo Ryo Mizuno and Takumi Takahashi, where Ryo enjoyed two-season firsts having progressed into the second stage of Qualifying and in Race 1 took his best-ever result in BSB in 12th place.

Meanwhile away from the track action, motorcycle journalist and Beyond the Blade presenter, John Hogan catches up with BSB Series Director Stuart Higgs about the Honda British Talent Cup and just how important the series is to the development of young racers. John is also joined by Evan Belford who currents leads the championship, as well as Casey O'Gorman. 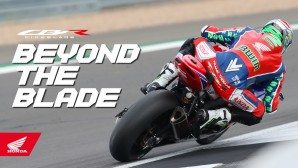