Beyond The Blade - Season 2, Episode 1

Video Wednesday 13th April 2022
Beyond the Blade returns for a second season where the Honda Racing UK team will take on the Roads and the Bennetts British Superbike Championship, launching a full-scale Superbike attack.

This season will once again follow the team in the British Championship with riders Glenn Irwin, Ryo Mizuno and Takumi Takahashi, as well as following reigning Superstock Champion Tom Neave's journey in the premier class in what will be his debut full season on the Superbike Honda CBR1000RR-R Fireblade SP.

With the return of road racing for 2022, the team will once again contest the International North West 200, as well as the Isle of Man TT Races, where Honda still holds the crown as the most successful manufacturer ever in the event's 115-year history. Not only are Honda back on the Roads, but returning to the Honda family is TT-legend and 23-time TT winner John McGuinness, alongside teammate and TT newcomer Glenn.

In the first episode of Beyond The Blade Season 2, we catch up with the team at its Louth-based workshop to see the changes to the Fireblade for the 2022 season, there's also a trip to Mugen's European headquarters to talk tuning. Plus, we spend a day in the life of 2021 Pirelli National Superstock Champion Tom Neave on the family farm in Lincolnshire, as he prepares for his rookie year in BSB. 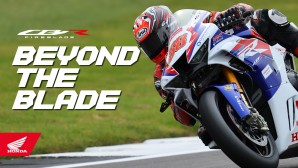