Beyond The Blade - Season 2, Episode 2

Video Monday 9th May 2022
On the eve of the North West 200, we go 'Beyond the Blade' as we build up to our return to international road racing. In this episode we journey to the North West 200 and catch up with Glenn Irwin as he looks forward to making his roads debut with Honda aboard the CBR1000RR-R Fireblade SP, two years after what should have been his debut in 2020.

Showing John Hogan around the North coast, Glenn reflects on happy racing memories at the 8.9-mile circuit, where he's secured four Superbike race victories - taking his first win in his maiden year in 2017, to follow-up with two wins in 2018, and again in 2019. The nostalgia for Glenn doesn't stop with his racing memories, but goes further back to when his father Alan raced at the event, and it's where Glenn spent his childhood.

We also head back to the opening round of the 2022 Bennetts British Superbike Championship at Silverstone, which turned into a superb weekend for the team, with Glenn doing the treble at the National Circuit.

For the 2022 season TT-legend John McGuinness is back with Honda in his 50th year, where at the Isle of Man TT Races in June, he'll celebrate his 100th start in the Superbike race. At the start of the year John went over to the TT, where he reflected on his first visit to the magical island in 1996, when he made his debut at the Mountain Course. 26 years, and 23 TT wins later - the excitement, emotion and feelings are all still there for the 'Morecambe Missile'. 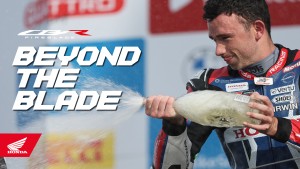