Video Monday 30th May 2022
Welcome back to Beyond the Blade, where in Episode 3 the Honda CBR1000RR-R Fireblade SP makes its long-awaited Road Racing debut at the North West 200, where Glenn Irwin stormed to victory in both Superbike races, taking the double to make it six wins from six in the Superbike class at the Triangle circuit.

There's a look back at the Bennetts British Superbike Championship with a recap of rounds two and three at Oulton Park and Donington Park, where the team and Honda UK Motorcycles celebrated 30 years of the Fireblade, with a unique event across the weekend.

Beyond the Blade presenter John Hogan, also takes a trip down memory lane with TT-legend John McGuinness MBE, as we look back at his younger years, with a trip around his hometown exploring the places he grew up, as well as some never-seen before home footage from the McGuinness family archives. 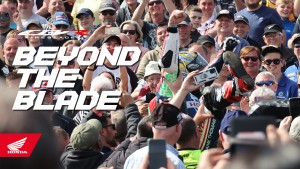