Race Preview Thursday, 12th August 2021
Honda Racing UK is arriving at Donington Park this weekend (13-15 August) on a high after Glenn Irwin and Tom Neave both returned to the podium last time out at Thruxton, aboard the CBR1000RR-R Fireblade SP, in their respective classes.
Returning to Donington’s National circuit, the team have happy memories at the 1.98-mile track after scoring an impressive double 1-2 last year at the opening round and Tom taking his first-ever Superstock win, all during the Fireblade SP’s debut race weekend.
With the success of 2020 and the team continuing to build momentum, the fifth round of the 2021 Bennetts British Superbike Championship is shaping up to be an exciting one. Glenn will be looking to repeat the success he enjoyed at Donington Park last August, challenging for the win and finishing all three races in second place.
For Glenn’s teammates Ryo Mizuno and Takumi Takahashi, Donington Park is another new circuit to learn, but one Ryo was able to test at pre-season. Liking the track layout, Ryo is eager to return to the Leicestershire circuit and work his way up the timings across the weekend.
Takumi missed the official pre-season test at Donington Park due to injury, so Friday’s first practice will be about gaining track knowledge. Progressing, and learning more and more during each event, Takumi scored his first-ever BSB points at the previous round and he’s keen to add to his tally this weekend.
Meanwhile, Tom Neave in the Pirelli National Superstock Championship will be looking for a repeat performance of last year, when he took his debut win in the Superstock class at the National circuit, where he currently holds the Superstock lap record of 1:07.419.
Superbike first practice gets underway at 1pm on Friday 13 August, with Race 1 taking place on Saturday and Race 2 and Race 3 on Sunday. Click here for the full timetable.

It was nice to be back on the podium at Thruxton, which was a positive weekend and I’m looking forward to continuing that at Donington Park, which is a strong track for myself and the Honda Fireblade when you look back at testing and the opening round last year. We followed up Thruxton with a successful test at Cadwell Park last week, where we made positive steps forward, which I’m looking forward to carrying over to Donington this weekend. If we are able to do that then I see no reason not to be fighting for the podium in all three races. The Showdown battle started slowly for us, but the next four rounds are ones where I think the Honda will be a strong package and we enjoyed success at last year. It’s important now that we’re making the right steps with the bike, and we rack up as many points as possible to leave the next rounds in a Showdown position rather than being on the cusp. I think we can now really start to show the potential of both myself and the Fireblade.

Looking at last year’s results, this is one of the favourite tracks for the Fireblade. The circuit is very similar to one in Japan, which is my favourite circuit. I gained a lot of experience last time out at Thruxton, so I will do my best from Friday’s first practice to make the most of Donington Park.

Donington is again another new UK circuit for me to ride, but I have heard that it is wider than some of the other circuits, which is nice to hear and I’m thinking of relaxing. I was happy to get my first BSB point at Thruxton, but we still have some work to do to build confidence and speed, so this weekend I look forward to learning Donington with the aim to ride faster.

Heading to Round 5, I'll probably say that I'm the most confident I've felt all year going into a race weekend. Donington is my most successful track on the calendar, we won at both the National and GP circuit last year so there’s a lot of positives already. I’ve put a lot of effort in at the gym and we have the lap record there, so there’s so many good pointers. I think we should be on for a positive weekend, and the weather is looking good as well! I’m confident and excited for it, I don’t feel like there’s too much pressure really, because I know when you’ve won and got a lap record somewhere you feel pressure to win. But I think with the progression of how the season has gone, having a third at Thruxton, to take that next step is a good build-up to the weekend and what to expect, hopefully we can win – it’s what we’re aiming for! 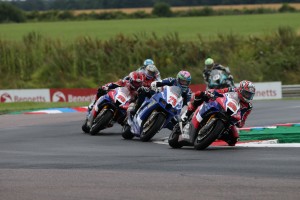