News Sunday, 17th October 2021
Today at Brands Hatch, Honda Racing UK and Tom Neave have been crowned the 2021 Pirelli National Superstock Champions with the CBR1000RR-R Fireblade SP.
After what started as a difficult season for Tom, plagued with an injury and illness, the Lincolnshire-ace’s luck turned around at the fourth round at Thruxton where he finished third in the second race, to take his first podium this year.
Next up was Donington Park’s National Circuit, and a happy hunting ground for both Tom and the Fireblade SP, he placed second and took his first race win of the 2021 season. The wins didn’t stop there and going to his and the teams’ home round at Cadwell Park, he took the Pole Position and won the race, to then follow up with another win at Snetterton.
With a consistent point-scoring season, Tom racked up three wins, two second places and two third places, and came into this weekend’s grand final 22-points ahead in the standings, and only needing four points to take the title. Crossing the line in eighth place was enough for Tom to be crowned the 2021 Pirelli National Superstock Champion.
Shortly, a new press release will be published including rider comments and photos of both the event and the celebrations. 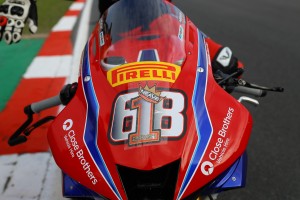