Solid weekend of points for Tom Neave at Knockhill

Race Report Sunday, 11th July 2021
Honda Racing UK's Tom Neave holds seventh place in the Pirelli National Superstock Championship standings after a positive weekend at Knockhill. Leading the way for the Honda team aboard the CBR1000RR-R Fireblade SP, Tom finished fourth and fifth in the day's two races and boosted his championship position to seventh place after arriving this weekend with zero points on the table.

Meanwhile for Glenn Irwin in the Bennetts British Superbike Championship, today was a vast improvement on yesterday's frustrations. Coming home 11th in Race 2, Glenn and the team worked hard to improve the set-up of the Fireblade at the Scottish circuit, but in the final race of the day it wasn't to be as Glenn crashed out, unhurt, while chasing down 10th place.

Teammate Ryo Mizuno continued to make progress aboard the Fireblade, as he continues to get to grips racing in the UK. An 18th place finish was the best of the pick for Ryo in the second BSB race of the weekend. Meanwhile Takumi Takahashi enjoyed putting in over 200 laps of Knockhill during his first visit to the venue. Still struggling with strength in his shoulder Takumi's highest place finish across the weekend was 21st.

The Honda Racing UK team will now head back to its Louth-base in Lincolnshire and prepare for the third round of the championship which takes place over 23-25 July at Brands Hatch.
For more content and images click here

Racing in 11th isn't usually what gets us excited, but the progress we've made this weekend has been massive. Fair play to the boys in that last race I felt strong and I probably could have caught the guys ahead of me. Everyone will talk about the crash, but that was 1% of the race as 99% was so positive. This weekend we have struggled a bit from a physical point of view, but the changes the boys made to the bike made it easier to ride, and I could also go faster. I'm gutted for them to be honest, I can take it on the chin but they've worked hard all weekend and it's been testing at times! How we turned up for the last race shows the progress and we were able to respond properly. The Fireblade is new to this circuit, so we had a bit to learn this weekend but I am looking forward to coming back, it's just a shame it ended with a crash.

It's been a very tough weekend. I feel like I've been running all the way from Saturday's free practice to today's Race 3 and now I'm feeling very tired. It's been a weekend where I've been able to step up my performance little by little. I'm not satisfied with the race results but I'm happy that I could finish the three races. I'm still working on my physical condition and I'm looking forward to the next race at Brands Hatch.

Today was as difficult as yesterday's race for me. During today's first race I had some problems and retired from the running. During the first half of the final race I was getting better little by little, but going into the second half my shoulder became weak and I couldn't hold the pace I had been running until the end. I will continue to train until the next race and prepare for the ride.

You always want to finish at the top in a race, or at least be on the podium, but I did what I came to do this weekend and that was to finish both races and get some solid points for the championship. For the most part this weekend we went faster in each session and just continued to understand the Fireblade a bit more. I can go home happy and relax, we came into the weekend with zero points and now we're seventh in the standings. I'm still getting over an illness and also recovering with my knee, so things still aren't 100% perfect. It's a long season and there's so much more we can do, so we'll keep at it and keep playing the long game. 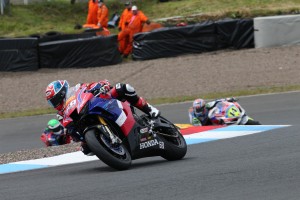