Victory for Glenn Irwin and Honda Racing UK at Silverstone

Building up to today's first Superbike race of the weekend Glenn was showing good pace and wrapped up Friday's combined practice sixth fastest promoting him straight into Q2. Qualifying fifth, Glenn started the race from the second row of the grid and stayed with the leading group during the first few laps. An incident with Takumi Takahashi brought out the safety car at the start of lap three, where Glenn's teammate was involved in an incident with Keith Farmer at Copse. Takumi is unhurt from the crash and will take part in Sunday's races.

As the race resumed Glenn pushed hard and was soon sitting in podium contention in second place. A move from Tarran Mackenzie saw Glenn drop back to third place, where he was having to defend challenges from a chasing Christian Iddon. On the penultimate lap Tarran and Jason O'Halloran crashed out, and with a clear track ahead Glenn took the race lead. However, soon after the crash the race was red flagged with Glenn declared as the Race 1 winner.

Ryo Mizuno has also got his Silverstone challenge off to a solid start getting into today's Q2 session for the first time this season. With his quickest qualifying lap of 53.570s, Ryo took his best qualifying position this season in 12th place. Enjoying the race and some on-track battles Ryo crossed the line 12th, collecting more valuable season points and also his best race finish of 2021.

Meanwhile Tom Neave in the Pirelli National Superstock Championship struggled to get a clear track during today's qualifying session, where he qualified 16th on the grid for his first race of the weekend. Knowing he had some work to do, Tom set about picking off his Superstock rivals as soon as the lights went out. Making up places lap by lap, Tom eventually crossed the line fifth, having made up an impressive 11 places throughout the 22-lap race. Setting the fastest time on lap four (54.673) Tom and his Fireblade machine will line-up in Pole Position ready for tomorrow's second race.

The team will be back in action tomorrow (Sunday 12 September) for two more Superbike races when the 'Title Fighters' will be decided, as well as the second Superstock race of the weekend.

It was a chaotic race, but I wanted to be one of those not making lunges at the beginning. I had to play it quite safe as I know the place in the Showdown is what we need this weekend. I saw with about eight laps to go Jason [O'Halloran] was starting to push and I did feel okay. But we also have a bad sector, which is sector three – Brooklands. I lose a little bit of traction front and rear and I start to understeer a lot, so we'll sit down and look and see if that's something we can improve for tomorrow. But a win - what a way to kick-start this Showdown decider weekend. There is pressure; we put ourselves under the maximum, but I like that because I think that's when I perform and I'm really happy with today. When the Fireblade is good like it is this weekend, I'm up to fight for the wins and podiums. I'll be trying my best again tomorrow, I think now we can go really get stuck in. To lose a 32 point buffer in two races would be silly, so let's go get stuck in!
Race 1: 1st

Today was my best result of the year at my favourite track. We were lucky in some areas but we were able to work step by step from the first day and today we made it to Q2 for the first time, so I'm happy with the day. We have two more races tomorrow, so I'll do my best to move up!
Race 1: 12th

I couldn't improve my lap time in the qualifying and I was 20th on the grid. In Race 1 I started and concentrated on improving my pace for a few laps. But on the third lap at the first corner I was hit from behind, crashed and had to retire. We have still 2 races tomorrow and I will switch my mind for tomorrow’s race.
Race 1: DNF

I didn't have a very good qualifying this morning, so I knew it was going to be a difficult race. I got a good start and worked my way through the group cleanly, I didn't do anything stupid, but I might have used a bit too much of my tyre coming through to get into the chasing pack and once we got right on the back of them I could see I was faster, but I had used the best of my tyre. I made a pass on Alex but didn't make it stick unfortunately, but we learnt a lot in that race. To start from Pole tomorrow is the best outcome I could have hoped for really and it'll make a huge difference to the race tomorrow.
Race 1: 5th 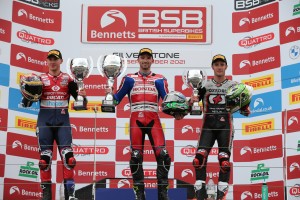